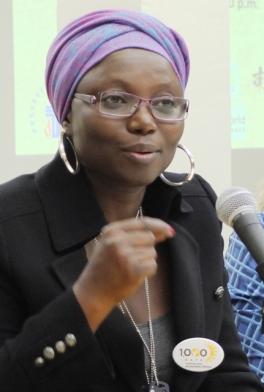 The Hunger Project was proud to co-host a highly successful parallel event during the 56th Commission on the Status of Women this February in New York City. The parallel event, “Thousand Days: Improving the Nutrition of Rural Women,” was held in association with Franciscans International, Bread for the World, Thousand Days, Family Care International, African Methodist Episcopal Women, and the Presbyterian Ministry at the United Nations.

The four distinguished panelists at the event were Lucy Sullivan, Director of Thousand Days; Dr. Isatou Jallow (pictured above), Chief of the Gender Unit at UN World Food Programme; Carolyn Miles, President & CEO for Save the Children; and Catherine Bertini, Professor of Public Administration at the Maxwell School of Citizenship and Public Affairs. Moderated by The Hunger Project President and CEO, Mary Ellen McNish, the panelists tackled the question: why is investing in good nutrition pivotal to sustainable development?

Lucy Sullivan began the discussion with a summary of the fundamental relationship between malnutrition and development. Quoting the major findings from a five-part 2008 study in The Lancet, Sullivan explained that children who lack adequate nutrition throughout their first thousand days will forever have diminished cognitive development and stunted physical growth. Combined, these two factors lead to decreased economic productivity and a higher likelihood of that child living in poverty. Because undernourished women are significantly more likely to give birth to low birth-weight babies and many people in developing countries are chronically food insecure, Sullivan argued for more investments to thwart the cyclical impact of malnutrition on poverty.

Carolyn Miles of Save the Children continued the discussion by examining the link between agriculture and nutrition. She illustrated the challenges rural women farmers face and offered potential strategies to overcome them. The challenges she addressed included land restrictions rural women farmers face when forced to work on smaller, less fertile land plots than their male counterparts. Simultaneously, women are less likely to have access to credit, market inputs, and transportation, limiting their ability to be active participants in the economy. In order to overcome gender discrimination and make the greatest impact on nutrition, Miles urged development programs to take into account gender barriers when dealing with women small holder farmers. Additionally, Miles recommended that the issue is brought to policymakers at the G8 level. Although government officials are currently speaking of food security issues, she would like to push governments in the G8 to focus more narrowly on nutrition and women.

The final speaker, Catherine Bertini of the Maxwell School, offered suggestions for ground level and policy implementations that would improve the lives of rural women. Bertini referenced examples of nutritional interventions for rural women from around the world, including Cambodia and Sub-Saharan Africa. In Cambodia, where 70 percent of girls suffer from anemia, Helen Keller International uses sprinkles to fortify the nutritional quality of food. In Sub-Saharan Africa, Girl Guides can earn an anemia prevention badge for their involvement in educational programs and community involvement in anemia control. Additionally, Bertini urged investment in small businesses that aim to grow indigenous, highly nutritious foods, so that women can easy access proper nutrition. In keeping with indigenous nutrition solutions, she also suggested manufacturing vitamin supplements locally, not only will the community’s health improve but the surrounding economy as well.

The panel concluded with audience Q&A and a panelist meet-and-greet. All in all, it was a highly successful, well-attended meeting of the minds that The Hunger Project was proud to be a part of.