Distinction of the week: UHC 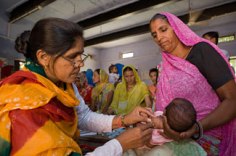 The health goal for the Post-2015 era is likely to beUniversal Health Coverage (UHC), defined by WHO as everyone being able to access prevention, cure and rehabilitation without risk of being pushed into poverty. See WHO’s 10 Facts.

The UHC Movement has been strong among civil society in Europe and those committed to a rights-based approach to development such as The Hunger Project.

Born Equal: How reducing inequality could give our children a better future by Save the Children UK. Another key distinction in the Post-2015 goals will likely be the focus on addressing inequality, which is at historic high levels. Last week Save the Children UK published a new report on the subject that points out that addressing inequality is crucial for accelerating progress on the MDGs. In 1990, 93% of the poorest lived in low income countries – now 70% live in middle-income countries – countries with resources to bring to this challenge.

An update of ‘The Neglected Crisis of Undernutrition: Evidence for Action’ by DFID – A new report on the science behind the SUN/1,000 Days nutrition development trends.

November 19: Release of Bread for the World’s 2013 Hunger Report