In early 2012, The Hunger Project’s Executive VP, John Coonrod, moved from New York City to Washington, DC to strengthen THP’s seat at the table of international development. Each week, John sends us insight into issues of health, policy, human rights and more by way of the Washington Weekly.

Quote of the week

“After studying international development, I felt it was hopeless. When I saw the epicenters, I felt – this is it! This works! This is how it is supposed to be.” – Anna, GWU Graduate Student, reporting on her work in our Monitoring and Evaluation (M&E) pilot project.

Themes from the InterAction Forum

THP was well represented by a team of four at this year’s annual 3-day InterAction Forum of the 200+ US-based international relief and development organizations that make up InterAction. This year’s Forum was attended by more than 1,000 individuals, including Lisa and Carolyn from the Global Office and Leanna and I from the Washington Office.

I spoke at a panel on capacity building, focusing on our work to strengthen participatory local democracy and its partnership with the people. Colleagues at ACDI/VOCA and the Alliance to End Hunger spoke on building farmers’ associations and national food security platforms. Read a review of the event.

The Forum is a great opportunity to take the policy temperature in Washington, and some of the themes raised included: 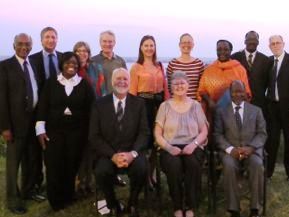 Board Meets in Mozambique

At the invitation of President Chissano, the Global Board of Directors held its annual meeting in Maputo – the first Board Meeting in a program country since 1999. On the eve of the meeting, Mary Ellen presented the work of The Hunger Project at the Polytechnic University at an event co-hosted by THP and the Chissano Foundation, and she and President Chissano engaged with students.