Dr. Badiul Majumdar’s awareness and fund raising tour of the U.S. is in full swing!

Hill Briefing on Right to Food 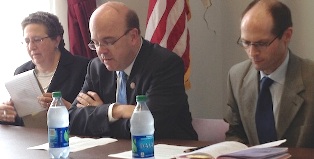 by U.N. Special Rapporteur on the Right to Food, Oliver de Schutter. He was joined by Kathy Ozer, Executive Director of the National Family Farm Coalition and member of the U.S. Food Sovereignty Alliance. De Schutter emphasized that the right to food was a problem in developed countries as well as in developing countries, and that care must be taken to implement agricultural policies that allow for the development of local food systems. He also acknowledged that gender plays a key role in food production, mentioning that land rights are often only held by men and that contracts for food production are often only signed by men, even though the actual work on the land and food production is done by the women. He underlined that simply making markets available would not solve this problem, but that women need to be integrated into the markets directly.

Ms. Aroma Dutta, Executive Director of PRIP Trust, member of the National Human Rights Commission in Bangladesh and long-time friend of THP-Bangaldesh, spoke Friday at a presentation on direct partnerships for local capacity development hosted by Oxfam America, Save the Children, and Women Thrive Worldwide. PRIP Trust (which began as the Private Rural Initiatives Project) aims to build human and institutional capacity – of both civil society and government – to lead Bangladesh’s development.

Ms. Dutta previously worked as a researcher with USAID in Bangladesh to lead a Pact project, and used her personal background to illustrate her points about how institutional NGOs can best interact with local organizations. Her chief point was that funding of local organizations cannot focus only on “projects” but must provide support for a community, ensuring that a system of engagement develops between local government, donors, and civil society. She argued that civil society must adopt a comprehensive approach – and must engage with the government – in order to make any impact on policy.