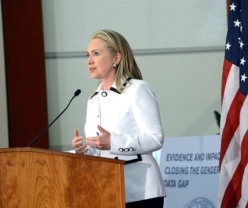 Last week, US Secretary of State Hillary Clinton launched a new initiative to Fill the Gaps in Gender Data. She stated: “If we’re serious about narrowing the gender gap and helping more girls and women, then we must get serious about gathering and analyzing the data that tell the tale.” She announced Data 2x which will develop new curriculum standards to ensure data producers and users train in gender-sensitive techniques. The project will work with key data organizations, including the UN, World Bank, OECD, PARIS21, and Gallup, to also publish a roadmap on how to fill priority gaps in gender-sensitive data as quickly as possible. Data 2X will report on its progress in one year’s time.

Over at the World Bank, newly elected President Jim Kim announced a new portal that brings together all of the Bank’s gender data. He promised to collect new data in 10 countries where it is currently missing. The event was co-hosted by Gallup.

Last Friday, The Hunger Project, along with 30 other NGO representatives met with USAID Administrator Raj Shah and UNICEF Deputy Director Geeta Rao Gupta to follow-up on last month’s “Call to Action.” To date, 56 countries and 100 Civil Society organizations have signed the pledge.

The Global Roadmap that was developed to accelerate child survival is now available online.

On Wednesday, Congressman Farr sponsored a panel entitled Leveraging Investments in Latin America: The Role of Microfinance & Public-Private Sector Partnerships in Latin America. Robert Kaplan, President and CEO of the Inter-American Foundation, and Dr. Nancy Lee, General Manager of the Multilateral Investment Fund of the Inter-American Development Bank were panelists. Dr. Lee focused on trends and impact, observing that 40% of microfinance clients in Latin America are poor and that the average loan size has gradually edged up over the years. Mr. Kaplan observed that while some progress has been made (participatory budget processes are common – 70% of households have a cell phone and the percentage of people living in poverty has gone down over the last decade) much remains to be done – the overall number of people living in poverty has gone up and many of the same households that own cell phones subsist on one meal a day. Moreover, violence and insecurity are increasingly a problem, with 28% of people considering crime the largest problem in their country.

On Thursday, Congressman McGovern convened a Tom Lantos Human Rights Commission hearing on Human Rights in Bangladesh, with Congressmen Ellison and Crowley in attendance. Robert Blake, Assistant Secretary of the U.S. Department of State, Eric Biel, Acting Associate Deputy Undersecretary of the Department of Labor, Tim Ryan, Asia Regional Program Director for the American Center for International Labor Solidarity, and John Sifton, Director of Asia Advocacy for Human Rights Watch, were panelists. While the hearing was quite extensive, it focused primarily on the difficulties in labor organizing in the country and refugees.

Update: An earlier version of this post had the Hunger Summit listed as taking place on August 10.