The Hunger Project’s Executive VP, John Coonrod, is in Washington, DC to strengthen THP’s seat at the table of international development. Each week, John sends us insight into issues of health, policy, human rights and more by way of the Washington Weekly.

Colleagues – we’re serious about empowering your voice in policy debates. So that we have a quick glimpse through your eyes, please take our quick survey.

The newly elected president of Mexico declared a Crusade Against Hunger and to launch it, he addressed a large audience in partnership with key civil society leaders on the podium, including our colleague Lorena Vazquez-Ordaz. Read (or Google-translate) the full piece on the President’s website. 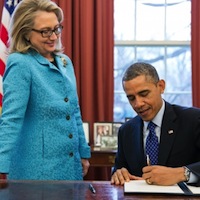 In one of her last acts as Secretary of State, Hillary Clinton stood with President Obama as he signed a Presidential Memorandum to strengthen and expand U.S. government capacity and coordination across all agencies to better promote gender equality and empower women and girls. In the Memorandum, President Obama reaffirmed that “promoting gender equality and advancing the status of all women and girls around the world remains one of the greatest unmet challenges of our time, and one that is vital to achieving our overall foreign policy objectives.”

From The Guardian: “It is possible to eradicate extreme poverty worldwide within our generation, David Cameron said at the close of a UN conference called to set out the world’s next development goals. The new goals are to succeed the millennium development goals that expire in 2015.”

“The prime minister stressed that a more responsible capitalism was required, including greater tax transparency. Britain, along with Liberia and Indonesia, is co-chairing a high-level panel on the new UN goals.”

Thousands of organizations, and several of our chapters around the world are organizing events to mobilize the public around the anti-violence protest One Billion Rising. There has never been a brighter global spotlight on gender-based violence than these days, as India adopts new laws and confronts major social and political transformation to address this challenge. Whether online or in person, join us in making your voice heard in the fight against gender-based violence.

One of the greatest tools for educating people about development assistance is InterAction’s Foreign Assistance Briefing Book (FABB) which provides compelling one-pagers on each key issue for members of the Congress and Administration. The pieces are written by staff and members (including THP).

March 4-15 – UN Commission on the Status of Women – focus on halting violence against women. THP side event, Tuesday March 12, 10:30am.

October 2 – Mahatma Gandhi’s birthday and the awarding of the Sarojini Naidu Prize.