The Power of Half: New Book from THP Investors, Kevin and Hannah Salwen 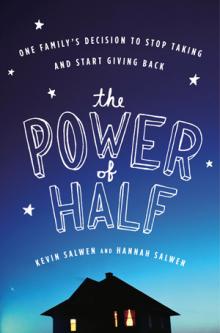 Kevin and Hannah Salwen, both Hunger Project investors, are a father-daughter writing team who together captured in their book, The Power of Half: One Family’s Decision to Stop Taking and Start Giving Back, their family’s life-altering decision and its unexpected results.

In The Power of Half, Kevin and Hannah recount their family’s joint decision to sell their Atlanta home, downsize to a smaller house, and then donate a significant sum from the home’s sale to an organization working to end hunger and poverty in Africa, which turns out to be The Hunger Project (THP).

This fairly typical American family–baby boomer parents and two teenage children–were motivated to take this extraordinary action by the then 14-year-old Hannah’s eureka moment. While driving with her father in Atlanta, she looked out the window and saw a homeless man standing alongside a glistening Mercedes. This prompted her to say: “You know, Dad, if that man had a less nice car, that man there could have a meal.” What followed was the remarkable and life-altering decision to sell their spacious home and give half of their profits to a worthy charity, The Hunger Project.

The Power of Half, published by Houghton Mifflin Harcourt, is now available from booksellers nationwide. See the first bullet below on how you can ensure that a portion of the proceeds go to THP.

Jill Lester, THP’s President and CEO remarks that “I hope the Salwen’s story inspires other families to discover the great value and joy, both for themselves and the world, which can result from a family participating in a charitable project together.”