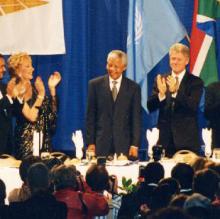 The Hunger Project mourns the passing of the greatest leader of our era – Nelson Mandela. President Mandela was the father of South Africa’s freedom and a beacon of hope to his nation, his continent and our world. He received The Hunger Project’s 1994 Africa Prize for Leadership for the Sustainable End of Hunger at a ceremony with President Bill Clinton in Washington, DC, and was married to our 1992 Africa Prize laureate Graça Machel.

In part of his address at our award ceremony, President Mandela included a paragraph very pertinent to our world today:

“There is conflict in many parts of the world, and many people have asked us, How is it that in your country which was divided from top to bottom by racial tensions and conflict has managed to bring the masses of the people together, former enemies? One of the principles which leaders in such a situation should observe in assessing whether we should work with our former enemies is the sacred principle, that the greatest glory of living lies not in never falling, but in rising every time you fall. It has been said that a saint is a sinner who keeps on trying. And that opens the possibility for all of us to strive to be saints.”

He concluded his remarks to this mostly American audience, saying:

“I love each and every one of you. You are my brothers and sisters. You are my children, my grandchildren. I sincerely wish I was carrying big pockets with me that I could put all of you in my pocket and take you back to South Africa. You are citizens of the most powerful state in the world. You have a dynamic and highly competent President. You are poised to play a decisive role in world affairs, and in helping the developing countries. I have no doubt that you will live up to expectations. May God bless you and your future endeavors.”