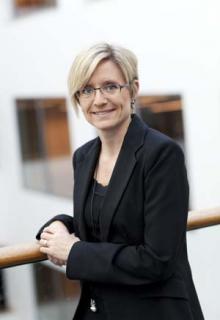 A former head of The Hunger Project in Sweden and long-time investor with the organization, Skogström Feldt currently sits on its national Board in Sweden. In making the announcement, Global Board Chair Steven J. Sherwood noted that Skogström Feldt “brings bold, intrepid leadership and a strong commitment to The Hunger Project’s values and principles. We are excited by what the future brings in our journey to end hunger by the year 2030.”

At IKEA, which she joined in 2012, Skogström Feldt has established a new initiative through which IKEA supports social enterprises that are within their value chains through business partnerships.

The first collaborative partnerships created in India, Thailand and Sweden have already resulted in limited edition collections of handicraft products that are being sold in select stores in Europe. The initiative is growing, with plans for additional partnerships and expansion to more countries and stores. It remains an important part of IKEA’s vision “to create a better everyday life for many people.”

As Country Director of The Hunger Project in Sweden from 2004-2012, Skogström Feldt succeeded in growing the organization and significantly increasing revenue and public awareness, particularly through networks of women and businesses. This was supported by an extensive PR campaign focusing on entrepreneurs.

“It is a critical time as the world is aligning on ending hunger and poverty by 2030,” Skogström Feldt shared. “We know this can only be done by empowering those living in hunger and poverty to be drivers of their own future. The post-2015 agenda will also require that each of us step up and collaborate to implement strategic and holistic approaches.”

“I see with Åsa the opportunity to take The Hunger Project to a whole new level in our work to expand our global movement to end hunger and poverty,” said current Hunger Project President and CEO Mary Ellen McNish, who announced her upcoming retirement late last year.

McNish will serve in her existing capacity until Skogström Feldt joins on September 1, 2014, to allow for a smooth transition. McNish plans to remain involved with The Hunger Project as an investor and activist, supporting the Global Board’s fundraising activities.

Skogström Feldt’s office will be located at The Hunger Project’s global headquarters in New York City.