The 2013 Human Development Report: The Rise of the Global South 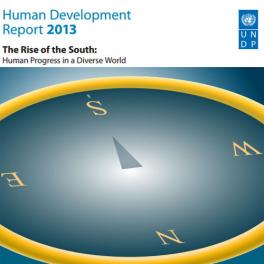 The 2013 Human Development Report, The Rise of the South: Human Progress in a Diverse World was released on March 14 in Mexico by President Enrique Pena Nieto of Mexico and United Nations Development Programme (UNDP) Administrator Helen Clark. This year’s report discusses the profound economic and global shifts that have occurred over the past 10 years, specifically focusing on the Global South. UNDP states, “The 2013 Human Development Report identifies more than 40 developing countries that have done better than expected in human development in recent decades.” Aligning with the mission of The Hunger Project, this Report seeks to “advocate the human development approach and core principles of national ownership, independence and objectiveness, and participatory process.”

First launched in 1990 by the UNDP with the statement “People are the real wealth of a nation,” this report discusses the research and methodology behind putting individuals at the center of development. With this report, the UNDP seeks to bring attention to issues of health and education to influence policymakers and push a development-based agenda forward, by collecting data at the local, national and regional level. UNDP states, “National reports place human development at the forefront of the national political agenda. They are tools for policy analysis reflecting people’s priorities, strengthening national capacities, engaging national partners, identifying inequities and measuring progress. As instruments for measuring human progress and triggering action for change, regional reports promote regional partnerships for influencing change, and addressing region-specific human development approaches to human rights, poverty, education, economic reform, HIV/AIDS, and globalization.”

China, India, and Brazil have long held the titles of developing nations that have dramatically risen to the top over the past decade. However, this year’s report focuses on countries that have done better than expected in development. Turkey, Mexico, Thailand, South Africa, Indonesia and many others have become leading examples of countries that have advanced in human development over time. The overarching goal of this year’s report is to identify and assess the policies that have driven these changes and advocate for those that could further promote greater progress throughout the world for the future.

The Human Development Report is a crucial tool that allows countries to track the progress of their development over time. It is also plays a vital role in human development advocacy, as it raises awareness of new approaches in addressing the challenges faced by developing nations. This report directly aligns with the goals and mission of The Hunger Project as it focuses on sustainable, grassroots strategies that place people at the center of their own development, ultimately leading to lives of self-reliance.