State of the World’s Children: ‘Every Child Counts’ 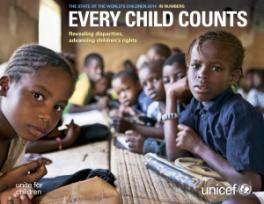 Last week, UNICEF (United Nations Children’s Fund) released The State of the World’s Children, a guide that presents the most recent key statistics on survival, development and protection of the world’s 2.2 billion children. The report, ‘Every Child Counts’ aimed to reveal disparities and advance children’s rights, while focusing on the importance of data and measurement in supporting advocacy and action.

Some data taken from The State of the World’s Children has shown tremendous progress made during the past few decades:

But the statistics also bear witness to ongoing disparities and violations of children’s rights:

Dates to watch: On the 25th anniversary of the Convention on the Rights of the Child (CRC) in November 2014, and the culmination of the Millennium Development Goals (MDGs) in 2015, world leaders will celebrate the progress made for children and recommit to making an impact for those children whose rights are not yet fulfilled.

Learn more on The State of The World’s Children by the numbers. To read the full report visit UNICEF.org. To join the conversation on social media, use #data4children.