Seizing the Opportunity to End Hunger

On October 17, Hunger Project investors, partners, activists and friends gathered in New York to celebrate our Annual Fall Gala. This year’s theme “Ending Hunger: Seize the Opportunity” invited guests to Participate, Connect, Invest and Lead in the goal that is gaining momentum around the globe: ending hunger once and for all. 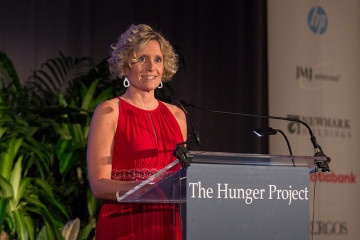 Hunger Project’s President & CEO Åsa Skogström Feldt gave an inspirational keynote address, underscoring that mobilized, active citizens who lead their own development are required for the end of hunger. “This transformation is only possible when we invest in approaches that support and encourage people to lead their own change,” Åsa said. Åsa reflected on progress made: the proportion of people living in hunger has been nearly cut by half and extreme poverty is expected to go to its lowest level–just 10% of the population. She also spoke of the challenges that lay ahead such as women’s economic status, maternal and childhood health and the invisible crisis of malnutrition. She invited each and every one of us to seize the opportunity we have right in front of us every day–to be leaders in the end of hunger.

Guests heard a special video address from U.N. Secretary-General Ban Ki-moon on the historic moment before us: ending hunger within our generation. His Excellency said that The Hunger Project has been a “staunch advocate” for working together to end hunger and poverty. 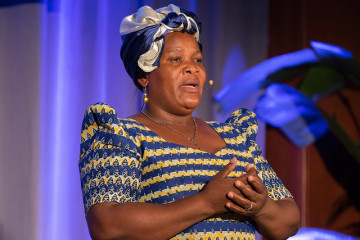 d leaders from our program countries. Tabita Mponda from Malawi shared how women, who were once subordinate to men, rose up in their community to become leaders of households, businesses and more. Jannatul Ferdous spoke of the importance of youth and building the youth movement in Bangladesh. Vanessa Gonzalez Deister from Banamex Foundation spoke of their partnership with The Hunger Project-Mexico on catalyzing self-reliant development.

The evening also included a special announcement from Åsa about the launch of the Joan Holmes Leadership Fund in honor of Founding President of The Hunger Project, Joan Holmes. The goal is to raise $1 million dollars by the end of 2015, and then another million by the end of 2016. “Joan awakened many of us to the possibility of ending hunger. Personally, Joan has been, and is, a great inspiration to me. And, I know that she has been an inspiration to many of you. And this holds true for countless investors and community partners around the world,” Åsa said.

We are absolutely thrilled to announce that through our corporate sponsors, ticket sales and cash and pledges for 2015 and 2016, we raised over $1.9 million for the end of hunger!

Thank you to all of our investors, activists and friends who participated!

Watch the videos of the speakers on our YouTube playlist.

On October 18, The Hunger Project hosted a special “Women in Philanthropy” (WIP) luncheon in New York City, which challenged both men and women to declare their ability to be visible leaders for global change. The lunch, which featured speakers from diverse backgrounds and expertise, underscored the importance of women’s leadership and participation in philanthropy. Speakers included:

During the event weekend, we showed our new Impossible to Possible video.