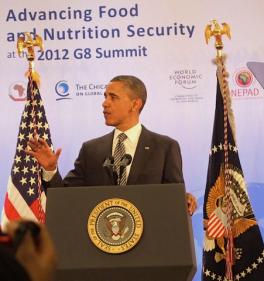 Last Friday, for the first time in American history, a sitting US President gave an address on ending world hunger. That same week he gave a strong endorsement of 1,000 Days nutrition and brought four African leaders to Washington DC (three of them from THP program countries: Benin, Ethiopia, Ghana) for an unprecedented session with the G8 on Food and Nutrition security.

As reported weeks ago, the Obama administration had signaled it would make food security a central issue at the G8 meetings – that it would report on compliance with the 2009 G8 l’Aquila commitments and build on them. Yet the question remained, in a time of austerity, how? The closely held answer was revealed by the President on Friday morning at a meeting hosted by the Chicago Council on Global Affairs. Several hundred experts and officials attended the meeting from both the private and public sectors.

After a brief review of the global state of affairs, President Obama announced a new global effort called the New Alliance for Food Security and Nutrition:

“Governments, like those in Africa, that are committed to agricultural development and food security, they agree to take the lead – building on their own plans by making tough reforms and attracting investment. Donor countries – including G8 members and international organizations – agree to more closely align our assistance with these country plans. And the private sector – from large multinationals to small African cooperatives, your NGOs and civil society groups – agree to make concrete and continuing commitments as well, so that there is an alignment between all these sectors.

“Now, I know some have asked, in a time of austerity, whether this New Alliance is just a way for governments to shift the burden onto somebody else. I want to be clear: The answer is no. As President, I can assure you that the United States will continue to meet our responsibilities, so that even in these tough fiscal times, we will continue to make historic investments in development….

“Today, I can announce that 45 companies – from major international corporations to African companies and cooperatives – have pledged to invest more than $3 billion to kick off this effort.”

The President told the audience that the New Alliance will operate with the goal of raising 50 million out of poverty over the next decade by investing in African agriculture.

In her concluding remarks, Secretary Clinton followed up on the President’s speech by addressing the skepticism some have that business investments will ever help the poorest:

“Now, I do realize that not everyone welcomes wholeheartedly the notion of more private sector involvement. And let me be clear that while global corporations play an irreplaceable role, we want them to prosper alongside local business, not at their expense. Private sector activity must start with the smallholder farmers whose future prosperity is the focal point of all our efforts, and then expand outward from there.”

U2 frontman and long-time activist, Bono, spoke as well and challenged African governments to apply their mineral wealth to meeting the needs of people and to be fully transparent about payments governments are receiving: “It’s finally dawning on most of us that the continent that contains the most poverty also contains the most wealth… Imagine a place bursting at the seams with gold, copper, oil… undeveloped arable land. Not to mention the human resources.”

Bono called attention to the fundamental change in paradigm underway: “Do you hear that? That’s the death of the donor-recipient relationship. You could call this an Irish Wake for the Donor-Recipient Relationship…. The future is partnership.”