Plumpy’Nut: A Cure for Malnutrition? 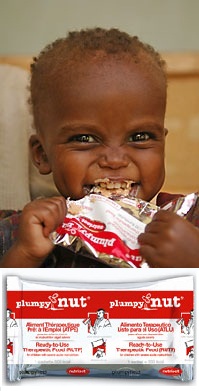 In 2000, the United Nations established eradicating extreme poverty and hunger as a goal of precedence, listing it first among the eight Millennium Development Goals. With the help of an unusual product known as Plumpy’Nut, the world now stands a better chance of reaching its goal of halving the proportion of people who suffer from hunger, halving the prevalence of underweight children (under-five years), and halving the proportion of the population below the minimum level of dietary energy consumption.

Invented in 1996 by French pediatrician André Briend and manufactured by Nutriset, Plumpy’Nut is a nutritional, sweetened, peanut-based paste. Unlike previous malnutrition formulas, Plumpy’Nut’s paste-like texture allows for easy storage, high calorie content, and a high concentration of essential vitamins and minerals in an easy-to-open package. Its convenience quickly drew the attention of The World Health Organization (WHO), United Nations International Children’s Emergency Fund (UNICEF) and the World Food Programme (WFP) who began recommending Plumpy’Nutto individuals suffering from severe acute malnutrition around the world.

Another advantage, Plumpy’Nut does not require additional water, potentially decreasing the prevalence of waterborne diseases in children. Although Plumpy’Nut’s nutritional formula rehabilitates individuals suffering from severe acute malnutrition of all ages, its target population is children under five to support the goals outlined by the United Nation’s Scaling Up Nutrition: A Framework for Action.

Compared to the invention of penicillin, Plumpy’Nut could be today’s most important scientific advance in the fight against malnutrition. In Niger, a country recently ranked the lowest in the Human Development Index, more than 63,000 children have used the product, usually returning to a healthy weight within a few weeks. Regional Humanitarian Advisor of the European Commission’s Humanitarian Aid Department (ECHO), Jan Eijkenaar, claimed Plumpy’Nut to be a “magical product. It helps children very quickly when they become malnourished…This can help them recover.”

In a time when the world is combating ever-rising food prices and hunger, innovations like Plumpy’Nut make all the difference.