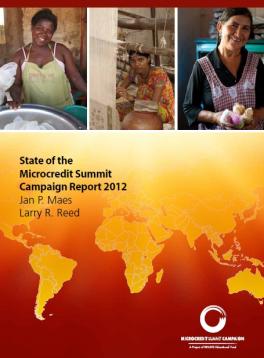 The Microcredit Summit Campaign, which brings together practitioners, advocates, donor agencies, and others to promote best practices in the field and stimulate the interchanging of knowledge, recently released its 2012 report. It primarily reflects upon two goals the Campaign set for itself in 2006:

1. Working to ensure that 175 million of the world’s poorest families, especially the women of those families, are receiving credit for self-employment and other financial and business services by the end of 2015; and

2. Working to ensure that 100 million families rise above the US$1.25 a day threshold, adjusted for purchasing power parity, between 1990 and 2015.

While largely on target to meet its first goal, current projections indicate the second one is out of reach. The authors of the report suggest that the two main reasons for this “humbling realization” are first, the challenge surrounding measuring poverty levels and second, the profound transformation that is required for someone to graduate out of poverty.

Fortunately, The Hunger Project (THP) is addressing both issues by putting in place Monitoring & Evaluation (M&E) systems to track partners’ progress out of poverty and by implementing the Microfinance Program as a component of the Epicenter Strategy, which empowers women and men to end their own hunger and poverty.

The report argues that the microfinance industry must take seven key steps if it wishes to achieve the goal of reducing poverty for 100 million families:

However, the challenge remains. THP recently reviewed its Epicenter Strategy and concluded that approximately eight years, not five, are required to bring communities to sustainable self-reliance. And generally speaking, people accept that meaningful development takes time. But how long is reasonable? If not by 2015, then when can the Campaign expect to reach this laudable goal?