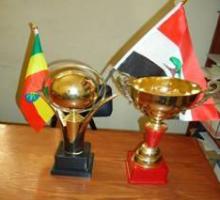 Gudatu Saving and Credit Cooperative (SACCO), or rural bank, of The Hunger Project’s Jaldu Epicenter in Ethiopia has been awarded two cups and certificates for its outstanding work in mobilizing the highest number of women members and the highest saving amounts among other SACCOs at the regional and federal levels.

The awards were handed over to the SACCO chairperson, Mrs. Ayantu Dube, by Mr. Alemayehu Atomsa, Oromia Adiminstrative Region President, on February 28, 2013 at Adam City and by Mr. Hailemariam Desaleny, Prime Minister of the Federal Democratic Republic of Ethiopia, on March 2, 2013 at Bahir Dar City, respectively.

The initial certificate award was prepared by the Oromia Regional Government Agricultural and Rural Development office on the occasion of the 6th Regional Farmers and Agro Pastoralists Festival celebration at Adama City. Following this, as the first of three SACCOs elected from the region, the Gudatu SACCO received its second award at Bahir Dar City on a similar occasion celebrated at the federal level. The certificate stated that the SACCO “is awarded for having contributed a lot in realizing the agricultural and rural development policy and strategy to enhance the agricultural production and productivity and for their active contribution in implementing the five years Growth & Transformation Plan.”

Both events were covered on regional and national radio and television programs.

Gudatu SACCO was the first certified SACCO among the six epicenters established by The Hunger Project in Ethiopia. Jaldu Epicenter began its activities in 2005 and since, the Microfinance Program (MFP) has been working to promote savings and credit activities among the epicenter community towards their effort for self-reliance.

In implementing the program, THP-Ethiopia has supported the community by providing initial seed capital. The program creates better opportunities, especially for women, as they engage in capacity building training, mobilize saving and access loans to engage in income-generating activities. Later on, with the objective of establishing a sustainable microfinance system in the community, the program was transformed to a SACCO in June 2009 and certified by the zonal cooperative promotion office with the name “Gudatu SACCO.”