“Today’s young people can help realize the sustainable development goals. Youth face many challenges, including poverty, conflicts and unemployment. But young people are not simply accepting this as their fate. They are rising up to challenge power structures… speaking out for justice and human rights … and advocating global action for people and the planet.”– Former UN Secretary-General Ban Ki-moon

August 12 is International Youth Day, a day to celebrate young people’s energy, imagination and initiatives. The theme of this year’s International Youth Day is “Youth Building Peace” and is dedicated to recognizing the role young people can play in peacebuilding, conflict prevention and resolution, as well as social cohesion, social justice and the sustaining of peace.

Since the adoption of Resolution 2250 on Youth, Peace and Security by the UN Security Council in December 2015, a greater emphasis has been placed on ways in which young women and men contribute to peacebuilding and social cohesion and on how youth can be agents of change.

Today’s youth make up ¼ of the global population. Yet in many parts of the world, young people — especially girls — don’t have access to basic education, reproductive health services and employment opportunities. These conditions are often exacerbated by, and often rooted in, conflict. By including youth in peace and security decision-making as well as ensuring access to quality education, health care and basic services, young people become drivers of long-lasting development that can bring peace and prosperity to their entire communities.

The fight against world hunger and poverty is a holistic process that needs to include emphasis on the needs of young people – across all aspects of life. The end of hunger can’t happen in the absence of peace and social cohesion.  The Hunger Project values the importance of youth in the achievement of social change, and that is why we place youth leadership training, education, and participation at the center of many of our programs.

In Bangladesh, for instance, we support greater involvement of young people in a wide range of civic activities. Our Youth Ending Hunger program trains young people and students on various social issues, mobilizing their communities for social change.  In Benin, The Hunger Project implements a youth entrepreneurship incubation strategy to promote youth entrepreneurship. Find out more about what we do.

As key stakeholders in the end of poverty and hunger, empowered youth can bring about real, sustainable change. 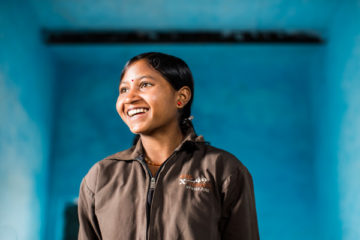 – About 152 million young workers live in households that are below the poverty line ($1.25 per day), comprising 24% of all working poor.

– More than 500 million youth (15-24) live on less than $2 a day.In developing countries, an estimated 2/3 of youth are not fulfilling their economic potential.

– 2 out of 3 countries do not consult young people as a part of the process of preparing poverty reduction strategies or national development plans.

– Working poverty affects as many as 169 million youth in the world. The number increases to 286 million if the near poor are included (living below US$4 per day).

– Estimates suggest that 60% of the world’s chronically hungry are women and girls.

– School meals are an investment in a child’s future. In some countries, they are often the only regular and nutritious meal a child receives daily.

– Inadequate facilities in schools force millions of girls around the world to miss class during menstruation. It’s estimated that more than half of schools in low-income countries lack sufficient toilets for girls or are unsafe and unclean.

– Over 30% of all new HIV infections globally are estimated to occur among youth ages 15 to 25 years.

– Worldwide, more than half of all sexual assaults take place against girls younger than 16.

– Each year, approximately 16 million adolescent girls give birth, the majority of which occur among married girls in developing countries. Pregnancy and complications related to childbirth are the number-one killers of girls aged 15-19. Malnourished mothers birth malnourished infants. Malnourished infants will be at risk of permanent stunting if mothers cannot breastfeed. 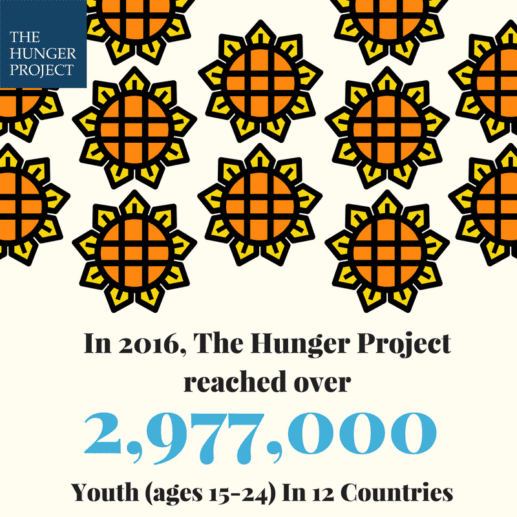 – The Hunger Project is part of Her Choice – a global alliance of organizations working to end child marriage in 11 countries, with the long-term goal of supporting the creation of communities that are free from child marriage and in which girls and young women can decide if, when and whom to marry.

– In Africa, The Hunger Project’s Epicenter Strategy mobilizes clusters of rural villages into “epicenters,” which band together people to carry out community-led integrated strategies to meet basic needs. In 2016, 316,900 young people participated in our programs in Africa, on topics ranging from financial autonomy to health and sexual education.

– In India, The Hunger Project empowers women elected to local government in more than 2,500 panchayats (clusters of rural villages) to meet the development needs of their communities. In 2016, 7 million participated in our programs in India. The Hunger Project puts a special emphasis on the empowerment of adolescent girls. In July 2017, for instance, THP-India took a group of young visionary girls on a special train journey from India’s state of Bihar to the state of Rajasthan.

– In Bangladesh, The Hunger Project catalyzed the creation of a national alliance committed to ending all forms of discrimination against girls. The alliance has led to the creation of National Girl Child Day. National Girl Child Day is a national strategy that seeks to improve the status of and end discrimination against girls in Bangladeshi society. Since 2000, the day has been celebrated every year on September 30.

– In Mexico and Peru, we support community development initiatives, focusing on the people who are the most marginalized, particularly indigenous women, reaching over 21,000 people. In 2016, 4,828 young people participated in our programs in Mexico and Peru. In addition, THP-Mexico has a partnership with the Technological Institute for Superior Studies of Monterrey (ITESM), an institute of higher education that promotes the knowledge and education of Mexican youth by hosting internships and volunteer programs.

– The Hunger Project hosts several delegations to the UN each year during various Commissions and Forums, and is consistently active in the area of youth engagement and leadership through its UN Representative Mary Kate Costello. Through our UN Representative, The Hunger Project is member of several UN civil society and multi-stakeholder groups, including: the UN’s Inter-agency Network for Youth Development’s (IANYD) Working Group on Youth and Gender Equality; the UN Major Group for Children and Youth; and the UN NGO Major Group. Watch Mary Kate deliver a statement at the General Assembly during the Opening of the 62nd Commission on the Status of Women (starts at minute 15:30).

– Globally, The Hunger Project integrates advocacy around women-led cooperatives to achieve women’s economic empowerment and the need for youth leadership skill development in all development and humanitarian programming. Through our UN Representative Mary Kate Costello, we have represented women cooperatives at various global events around the world, including in Bali, Indonesia at the International Cooperative Alliance’s Asia Pacific Youth Forum and in Geneva, Switzerland to make formal interventions to the UN’s Preliminary Process for the Global Compact on Migration.

What You Can Do

– Join the global conversation about International Youth Day and let your voice be heard! Follow along and share your thoughts with #YouthDay and #Youth4Peace.