In Mozambique, a Community Works to Provide Clean Water Close to Home

At the Chokwe epicenter in Mozambique, access to clean water became a key challenge as the primary source of water for the community was highly salinated due to flooding. Women had to walk about 1.5 miles every day in order to access drinking water, which meant they had less time to take care of household activities, children and participate in epicenter activities, such as trainings, literacy classes and their own income-generating activities.

In addition, the epicenter building’s plumbing and water system, which was connected to the compromised water sources, was becoming damaged and clogged regularly from the salinity, meaning that ongoing maintenance and repair costs were very high. 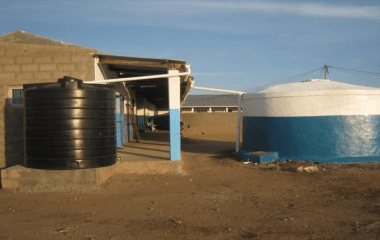 Plastic tank at the corner of the health center

In order to tackle this issue, The Hunger Project-Mozambique, with the support and financial contribution from the Tecovas Foundation, was able to connect the epicenter community with the Instituto de Permacultura de Mozambique (iPERMO) to implement a rainwater harvesting and storage system. The idea for the system came out of an examination of the epicenter roof, which had good capacity to collect rainwater, but lacked a system to store it.

The project was carried out by nine community partners from Chokwe, made up of local volunteers, or “animators,” and general villagers with skills in building and brickmaking, in addition to 10 partners from IPERMO. The training sessions at IPERMO consisted primarily on how to build the structure of the rainwater harvesting system, which was replicated at Chokwe when building the tank. In addition to learning how to build the tanks, the sessions at IPERMO included explanations on how the project works and that the tanks were built not only for drinking water, but also for irrigation needs during a rain shortage. Having fostered strong community mobilization at Chokwe, many women and children supported the project by providing additional water for the tank and cooking for the participants.

The project also had the added benefit of providing water for the health center.

In the future, the community is eager to examine the the plumbing system currently in place for the main epicenter building, as it requires frequent repair due to the water salinity. The community’s immediate plans are to link this original plumbing system to the newly-installed rainwater harvesting tank, so that the rainwater can also support the inside of the epicenter building.