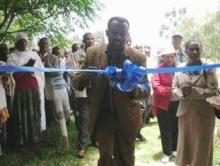 The ultimate objective of The Hunger Project’s (THP’s) Microfinance Program (MFP) is to gain government recognition and operate as a licensed saving and credit cooperative (SACCO) or Rural Bank. Owned entirely by community members, the Rural Bank then provides the entire epicenter community with sustainable access to savings and loan facilities. We are proud to congratulate THP-Ethiopia’s latest SACCO at Jaldu Epicenter: the Gudatu SACCO.

The Gudatu SACCO official inauguration ceremony took place on April 16, 2010 and was led by Mr. Ajama Tolasa, head of the Jaldu District administration and a guest of honor. Country Director of THP-Ethiopia, Mr. W.A. Gubaie; chairperson of THP-Ethiopia’s Advisory Council, Mrs. Fetenu Bekele; local officials, representatives from each of the five epicenter committees as well as SACCO members from the five surrounding kebeles (neighborhoods) took part in the ceremony.

The graduation of the epicenter MFP to a fully-recognized SACCO is a reflection of the achievements of the MFP members and the program’s sustainability. Members hope that this success will ensure the commitment of local government to capacity building for the Gudatu SACCO in the future.

Ms. Ayantu Dube, chairperson of Gudatu SACCO, shared with the ceremony attendees the experiences of the last five years in the journey to self-reliance. She expressed her appreciation and special thanks to THP-Ethiopia for its support in establishing a sustainable savings and credit service for the community and for its efforts to end hunger and poverty in the region.

With the support of the MFP, Jaldu Epicenter has been able to conduct numerous capacity-building trainings, such as safe family-planning, and sustain a revolving loan fund that has helped members engage in a variety of income-generating activities. Increased income generation has allowed members to own property as an asset, provide their families with nutritious food, support their children with school materials and clothing, and update housing from grass roofs to iron roofs. With the revolving loan fund, MFP members have also been able to build pit latrines for waste, encouraging environmental sanitation and general hygiene in the community.Gudatu Certificate of Appreciation 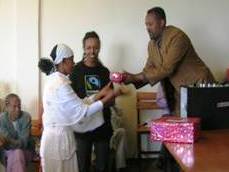 Since the commencement of the program, 862 people from the five kebeles have actively participated in the RLF, with 70 percent of members being women. At the time of the inauguration, members had saved a combined total of birr 110,372.00 (US$8,224). Loan committee members with the best continuous loan performance over the last five years received certificates of appreciation during the ceremony.

The District Administrator publically congratulated THP-Ethiopia on its collaboration with the community and local government in implementing rural development activities, such as the MFP and Shonta Water Project, activities that have helped improve epicenter community life in the past five years. He applauded THP-Ethiopia’s commitment to the SACCO and expressed hope for the future of the program. He promised the government’s continued support for THP-Ethiopia and the Epicenter Strategy.

Representatives from the five surrounding epicenters had the opportunity to share their personal experiences with the audience and expressed their appreciation for the positive impact of the program on their communities. In turn SACCO management members shared information about committee activities, procedures, documents and SACCO achievements.

Representatives from local cooperatives, women and children affairs offices, finance and economic development offices and journalists were also in attendance.

Meet a member of the Gudatu SACCO, Kibe Guta.

Read more about the Microfinance Program in Africa.

See our work in Ethiopia.