Global Week of Action: Vote for the World You Want 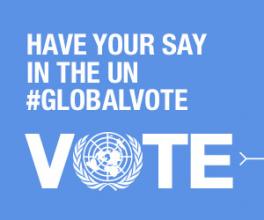 Vote today in the United Nations global vote, and say this is MY World.

MY World is a United Nations global survey for citizens. The goal of the survey is to capture people’s voices, priorities and views, so world leaders can be informed as they begin the process of defining the next set of global goals to end poverty.

The survey asks individuals which six of sixteen possible issues they think would make the most difference to their lives.

Currently, the results of the survey show “a good education” as the issue with the most votes.

To date, 1.7 million have voted for the world they want. This week, May 5-11, is the Global Week of Action, a worldwide mobilization effort to gather 500,000 additional MY World votes using new digital channels, videos and grassroots organizing around the world. Be part of the movement and vote for the world you want.

The UN is working with governments around the world to define the next global agenda to address extreme poverty and preserve the planet, following the expiration of the Millennium Development Goals in 2015. The results of MY World will be shared with the Secretary General and global leaders as they prepare the next development agenda in the run up to 2015.

MY World was jointly developed by the United Nations Development Programme, the UN Millennium Campaign, the Overseas Development Institute and the World Wide Web Foundation.

Take Action: Vote for the World You Want