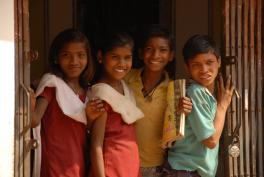 Around the world, 170 to 180 million children are suffering from stunting, a medical condition caused by insufficient nutritional intake. The hidden crisis of child malnutrition was discussed at a February 15 Save the Children event, “A Life Free From Hunger: Tackling Child Malnutrition.”

In Save the Children’s recently released report, researchers suggests that malnutrition is a key factor contributing to more than one-third of global child deaths (2.6 million) per year. The report serves as a call to action for governments, NGOs, international organizations and businesses to join forces to collaborate to prevent the spread of the malnutrition and hunger around the world.

At the event, distinguished panelists addressed ideas on how to prevent the spread of hunger and malnutrition. They discussed the necessity for increased funding since solving the malnutrition crisis has proven to be an expensive task – estimated at over $10 billion per year – and involves a multi-dimensional approach. Should public health funding fail to attack malnutrition in a holistic manner (including addressing transportation, education and so forth), children around the world will continue to be undernourished.

Scientists currently know how to fix hunger and malnutrition, but the problem lies in its implementation. Panelists described a need for creativity in the implementation of and scaling up of nutritional projects.

Finally, the panelists praised the Scaling Up Nutrition (SUN) Framework. Signed by over 100 organizations, NGOs and governments, the SUN Framework pushes for healthy nutrition to be integrated as a national government priority. However, 51 million stunted children still live in food insecure regions among 26 signatory countries, shining even more light on the findings in the 2008 Lancet study that suggested the importance of nutrition in children younger than two years. For this reason, it is vital that we continue to work to advance the SUN movement.

The event was moderated by Ms. Patricia Erb, CEO of Save the Children Canada, and included notable panelists Professor Jeffrey Sachs, UN Secretary-General’s Special Adviser on the MDGs; Ms. Kathryn Bolles, Save the Children’s Senior Director for Health and Nutrition; Dr. Stanley Zlotkin, Professor of Paediatric Medicine and founder of sprinkles; Mr. Werner Schultink, Associate Director of UNICEF’s nutrition sector; Her Excellency Mwaba Kasese Bota, Ambassador and Permanent Representative of Zambia to the UN; His Excellency Guillermo Rishchynski, Ambassador and Permanent Representative of Canada to the UN; and Ms. Sara Ziff, Founder and Director of the Model Alliance.

Source for all statistics: Save the Children report entitled A Life Free from Hunger: Tackling child malnutrition.