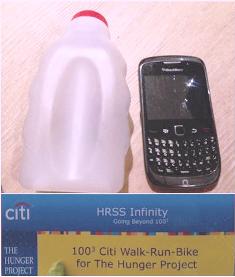 Right now, Citi employees around the world are banding together for a virtual event to walk, run or bike 100 kilometers in 100 days to raise $100,000 toward ending hunger and poverty in our world. With a virtual event, participants raise funds to end hunger and poverty but, instead of participating in a one-day event, they choose when and where to complete their kilometers over a set period of time. Having a virtual event enables people from around the globe to participate and also allows us to invest more of the money raised where it’s needed most: in the villages of Africa, South Asia and Latin America. The following post was submitted by Citi employee Steven Yong about truly understanding what it means to want for resources.

How does it feel to be hungry and thirsty?

I did a Royal Parks run last Saturday, something that I thought would be interesting since I re-located to London two years ago. There are eight Royal Parks around London. The idea was to run around 6 parks, and cycle the remaining two further out parks the next day.

I arrived at St. John’s Wood tube station at around 7 pm and began my run towards Regent’s Park. Quite quickly I was heading towards Hyde Park & Kensington Gardens. It was then I recalled a comment from The Hunger Project’s Supriya Banavalikar that some villagers had to go out early in the morning to look for water, something that most of us get by turning on the tap. I decided I should experience a bit of hunger and thirst during this run. I had not eaten since lunch and only had half a bottle of water left…and the bottle is only slightly bigger than a Blackberry. Let’s do this.

Immediately, I had to consciously ration my remaining water supply. Even just sipping every 15 minutes or so, I was dry by the time I finished Green Park/St James Park. With about 10 km more, it was going to be a thirsty and hungry run towards Greenwich Park (home).

To cut the story short, after around 26 km with quite a bit of self-deception, I completed the run feeling quite drained. When you are thirsty, every drop of water is precious. I was a lot better off compared to the villagers… because I know my run will end and I will get food and water…they don’t.

Just another reminder that every little contribution from us will make a big difference for them.