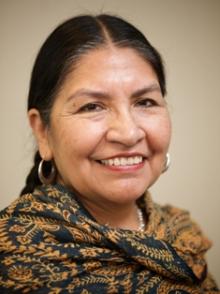 In May 2012, UN Women Executive Director Michelle Bachelet announced the members of her Global Civil Society Advisory Group. We at The Hunger Project are proud to announce that Tarcila Rivera Zea, Director of Chirapaq, our partner organization in Peru, has been appointed to the consultative forum.

The UN Women advisory group was established earlier in the year at the 56th session of the Commission on the Status of Women — at which our Executive Vice President John Coonrod served as the first-ever male U.S. Public Delegate — and will facilitate regular consultations and dialogue between civil society and UN Women.

Tarcila will serve with the group for two years, along with influential leaders from around the world, with the main objective of “dialogue and engagement to advance global goals of gender equality and women’s empowerment.”

About the advisory group, Ms. Bachelet had this to say:

“I am delighted that a group of outstanding international women’s rights advocates and experts on gender issues have agreed to serve on my Global Civil Society Advisory Group. They will play an important consulting role, and provide strategic perspectives on advocacy on gender equality and women’s empowerment and on UN Women’s thematic priorities. They will also help strengthen UN Women’s engagement and partnerships with civil society at all levels. I look forward to working together towards our common goals.”

Tarcila is well recognized throughout the development and women’s empowerment community and, in July 2011, was honored with a Visionaries Award from the Ford Foundation for her work on “lifting the voices of indigenous people.” We look forward to hearing about her continued work with the Global Civil Society Advisory Group.