Bringing Governance to the People 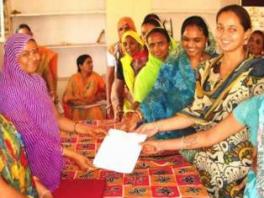 The Hunger Project-India and local state partners recently held a series of interfaces with Parliamentarians and elected women representatives in the states of Rajasthan, Madhya Pradesh, Karnataka and Odisha. This was a first time such an intervention was undertaken by THP-India, and it has received a positive response from both the participating Members of the Legislative Assembly (MLA) and the elected women.

So far, six meetings in Odisha and eleven in Rajasthan have been attended by the parliamentarians and elected women. The meetings have been well received with active participation from all quarters.

Some of the issues taken up by the elected women have been availability of safe drinking water, proper functioning of schools and health centres at the village level, and issues related to development activities. These interventions have provided the elected women another avenue to assert their identity as political leaders by taking up local issues, making assertions, engaging in debates affecting local governance in their respective areas and thereby enhancing their political participation.

The interface with the parliamentarians has also provided a platform for elected women to raise different advocacy issues, both locally and at the policy level, directly with their MLA. One of the elected women’s most impassioned efforts has been advocating for removal of the draconian two child norm. Memorandums have been submitted and handed over to the parliamentarians in states of Odisha and Rajasthan, respectively.

The two child norm is currently prevalent in states of Odisha, Rajasthan, Maharashtra, Gujarat and Andhra Pradesh. In Odisha, it was introduced in 1993 and it came into effect in 1997 Panchayat elections. In the two child norm as formulated, a person having more than two children or more than two living children after a specified date is not eligible for entry or continuance in panchayats.

This norm goes against basic reproductive rights of an individual and in the process hampers elected women representative’s as well as representatives from other marginalized communities to exercise their political right to contest elections and to effectively participate in the same.

These interfaces have resulted in sensitizing Parliamentarians to the issues and challenges faced by elected women and have provided them with an opportunity to interact with the women leaders at the grassroots. The elected women too, get a platform to table their issues and at the same time, follow it up with their respective parliamentarian.

The intervention seeks to promote transparency and accountability in the area of local governance. It helps in facilitating local democracy that is effective and people oriented, by providing a space for interaction which is based on mutual respect for each other’s political agency.