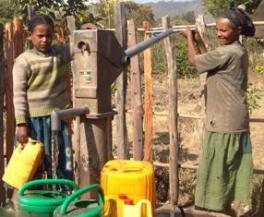 In September 2000, the leaders of 189 nations made a commitment to achieve specific results by 2015 in eight major areas of international development, results that have come to be known as the Millennium Development Goals (MDGs).

Reports today reveal the successful, early achievement of a target of MDG 7: Halve the proportion of people who are unable to reach or to afford safe drinking water.

The report shows that many small countries have made the greatest advances in water access, including THP program countries Malawi and Burkina Faso, and suggests that more than 90 percent of the world’s population will have access by the original goal of 2015.

Unfortunately, MDG 7 in its entirety also called for improved sanitation in conjunction with access to water – an aspect of the goal that is far from being met, according to the UN.

In other news, a new World Bank report suggests that another MDG target has been met. The report, reviewed by the New York Times today, found that 1.29 billion people, or 22 percent of the developing world’s population, live below $1.25 a day, down from 52 percent in 1981 and falling well within the requirements for meeting one aspect of MDG 1: Reducing, by half, the proportion of people living on less than $1 per day.

Knowing that our goals are attainable, we thank YOU for your continued investment in the empowerment of people and the end of hunger, poverty, gender discrimination in our world.