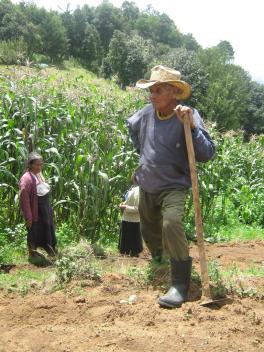 With the geopolitical and environmental impacts of ever increasing fossil-fuel dependency, public and scientific discourse has turned towards possible alternatives and their place in an environmentally and socially sensitive world. One of the more popular options is biofuel, or energy derived from biomass – commonly ethanol from corn or sugar or diesel from vegetable oil. Since cars running on biofuel emit much less CO2 and the energy source is renewable insofar as we can always plant more crops to turn into fuel, the method has rightly received plenty of public attention as well as funding and policy boosts in the United States.

Despite its seemingly endless benefits, biofuel has received considerable backslash due to various complicating factors. For one, the processing of raw biomass material into usable fuel, in addition to growing the crops and making necessary inputs such as fertilizers and pesticides, is an energy intensive ordeal. So much so that the question becomes whether biofuels like ethanol from corn actually use more energy than they provide. Furthermore, since much of the production process uses fossil-fuels like natural gas, biofuel itself can be argued to still depend on the source it is suppose to supplant. A more salient complication exists still in the impact of an expanding biofuel market on land use around the globe. For the energy and environmental discussion, biofuel production has incited vast criticism for its tendency to turn huge tracts of forests in crop land – observe the alarming example of palm oil production in Southeast Asia.

Additional criticism arises when the potentially lucrative market incentivizes displacement of food and feed crop for biofuel cash crops. In this way, the biofuel debate is no longer contained solely as an environmental debate but has repercussions for an already strained food supply, especially for the world’s poorest and most vulnerable people: rural farmers in developing nations. Competing for valuable land and driving out subsistence farming, biofuel has recently been linked with rising food prices and hunger and contributed to the land grabbing phenomenon in which large foreign companies acquire vast lands in Africa for biofuel plantation.

In light of all of this, is biofuel a threat to world food security? Maybe not. In fact, recent articles in Nature argue that biofuel can serve as a possible “savior” for Africa and its economy by “spurring agricultural development, job creation, and providing a source of electricity and possible exports,” bringing energy, infrastructure and other development to regions where they are lacking. Certain routine biofuel crops can even help regenerate degraded soil, helping agricultural production. Yet, over all the question remaions, n the face of recent well-reasoned and enthusiastic calls for small-scale farming as a solution to world hunger, does mass scale monocultural cash crop production really have a place in a sustainable food and environmental system?

Discussing the merit of biofuel in environmental and developmental debates is complicated and we welcome your input to the discussion. Let us know your thoughts on the topic!