On March 8, The Hunger Project, together with billions of people around the world, celebrated International Women’s Day. The theme this year was “Empowering Women, Empowering Humanity: Picture it!”

This year’s International Women’s Day was especially significant, as it marked 20 years since the Beijing Declaration and Platform for Action, a historic declaration signed by 189 governments in 1995 that set the agenda for realizing women’s rights.

There has been much progress made since then, but many critical gaps remain and our programs are working to reduce these gaps. Read on to see highlights from our teams in Bangladesh and India.

The Hunger Project-Bangladesh, jointly with the National Girl Child Advocacy Forum (NGCAF), celebrated International Women’s Day in 372 locations throughout the country. A central event was organized in Dhaka and was followed by a huge rally, discussion meetings and a special award ceremony honoring women who are contributing to women’s empowerment and development. 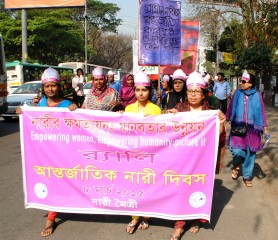 The event included a procession led by women and girls, with the participation of approximately 1,350 women, men, students, human right activists, academics and NGOs and representatives from 45 organizations and institutions. Participants held signs with slogans that said “stop violence against women,” and “implement the 2011 national women development policy.” The marchers chanted things like “ensure women’s rights” and “we want a discrimination-free society.”

After the rally, participants joined a discussion meeting with Meher Afroj Chumki, State Minister, Ministry of Women and Children Affairs, Government of the People’s Republic of Bangladesh. The session was chaired by Dr. Badiul Alam Majumdar, Country Director of The Hunger Project-Bangladesh and President of National Girl Child Advocacy Forum. Numerous other scholars and advocates were in attendance. The central theme of the discussion was “Empowering Women, Empowering Humanity: Picture It!”

In her speech, Meher Afroj Chumki stated that women’s empowerment and gender equality are needed to move the country further, and the education of women is essential. And while there is much work to be done, she also underscored the progress already made with the laws passed that protect women from violence as well as the social safety net programs designed specifically for women.

Several other speakers spoke on the importance of women’s empowerment and gender equality. A publication “Voice of Women-10” (Narir Kotha-10) was distributed to guests.

The Hunger Project-India was involved in and attended numerous events for International Women’s Day. In Rajasthan, a women’s day event was organized with the participation of 225 Elected Women Representatives (EWRs). In Odisha, Hunger Project staff attended an event which highlighted the falling sex-ratios in the state.

Rita Sarin, the Country Director of The Hunger Project-India, participated in a roundtable tea at Roosevelt House, the residence of United States Ambassador to India, Mr. Richard Rahul Verma.  The event was attended by a small group of women entrepreneurs and social activists who have been working towards women’s empowerment in the country. Rita spoke about The Hunger Project, with a focus on empowering women in politics.