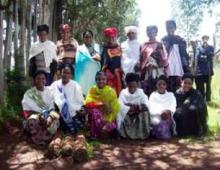 Based on a report by Beyene Moges, Monitoring and Evaluation Officer, The Hunger Project-Ethiopia.

The Hunger Project-Ethiopia currently works in six epicenters throughout the country facilitating development programs in rural communities. Committed volunteers in each epicenter community are trained to be animators and are integral in the development and implementation of programs and educational initiatives.

A newly trained group of 58 animators from Enemore Epicenter recently met with The Hunger Project-Ethiopia’s Monitoring and Evaluation Officer to discuss and evaluate their accomplishments and important lessons learned within the epicenter’s VCAWs. At the time of the meeting, the most effective programs were recognized as being agricultural trainings and general education. Most notably within education was the success of several animator trainings on the topic of female genital mutilation (FGM).

FGM is a long-standing cultural practice of cutting away parts of the external female genitalia and is most commonly performed on girls between the ages of four and eight, though it can take place at any age from infancy to adolescence. The practice affects at least 200 million women and girls alive today.  Typically called female “circumcision” by those who practice it, FGM is not only traumatic but highly dangerous and often leads to life-long pain and suffering, or even death, for girls who are subjected to the procedure.

Ethiopia has one of the highest levels FGM in Africa, where, according to 2016 UN data, 74 percent of girls and women nationwide have been subjected to the practice. The animators of Enemore Epicenter identified three of their own kebeles (districts) still widely practicing the harmful tradition and began specific and repeated training campaigns to discuss the numerous disadvantages of FGM.

One animator, Mr. Teka Bataga, shares his experience with the campaign:

“Last week a friend and neighbor of mine told me he is planning to circumcise his one-year-old daughter. I told him, soberly and after choosing the right moment for our discussion, about the disadvantages of this harmful practice. We, the animators, were lectured on this subject. I told my friend and neighbor: FGM is often performed in poor sanitary conditions by traditional practitioners with immediate and long-term health consequences. Immediate complications include excruciating pain, shock, urine retention, ulceration of the genital regions and injury to the adjacent tissue. Other complications include blood poisoning, infertility and obstructed labor and more. Then my friend and neighbor remarked, “I was about to kill my only daughter. Thank you for such valuable information. As of today I will be a campaigner against FGM too.”

Mr. Bataga’s personal achievement is one of many and has inspired his fellow Enemore animators to launch similar efforts with their friends and neighbors in addition to facilitating formal trainings.