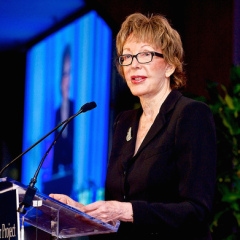 Joan Holmes is the Founding President of The Hunger Project, serving as President and CEO from 1977 until 2007. She has built The Hunger Project into an influential strategic organization that aims to end world hunger by mobilizing grassroots people, empowering women and forging partnership with local government. Ms. Holmes also served as a member of the United Nations Millennium Project Hunger Task Force.

Ms. Holmes has worked with numerous heads of state, and was invited by the Planning Commission of India (1990) and the President of Senegal (1991) to organize and lead National Strategy Conferences for the end of hunger in those countries.

Ms. Holmes has participated in numerous international meetings and served on many boards and councils.

2008: Named one of the 21 Leaders of the 21st Century by Women’s eNews.
2006: Keynote speaker at Microsoft’s Women’s Conference.
2005: Represented the UN Millennium Project Hunger Task Force at the Beijing Plus 10 meetings of the UN Commission on the Status of Women and at the Preparatory Meetings for the ECOSOC High-level Segment.
2004: Served on the UN Millennium Project Hunger Task Force, bringing her expertise on gender and social mobilization, including participation at the High-level Meeting in Addis Ababa and the final drafting meetings in Bellagio.
2003: Testified before the Congressional Human Rights Caucus and the Congressional Women’s Caucus on Women and Ending World Hunger: the Inextricable Link.
2001: Participated in the UN General Assembly Special Session on HIV/AIDS.
1995: Delegate to the Copenhagen Social Summit and Beijing Women’s Conference.
1989: Co-chair of InterAction Forum, May 6-8.
1986: Special guest at the UN Economic Commission for Africa annual conference in Cameroon.
1985: Delegate to the NGO World Conference to Review and Appraise the Achievements of United Nations Decade for Women, Nairobi.
1982: Served on the Costa Rican Presidential Commission.
1981: Led delegation to Costa Rica at the invitation of Archbishop Monsignor Roman Arrieta to assess availability of food.
1981: Testified before the House Foreign Affairs Subcommittee on Africa.
1980: Convener and Chair, 1980 Symposium on World Hunger, Glen Cove, New York.
1979: Participant in President Carter’s White House consultation on famine in Cambodia.