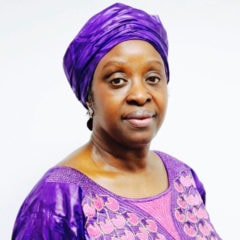 Special Envoy of the Chairperson of the African Union Commission on Women, Peace and Security

Mme Bineta Diop is currently the Special Envoy of the Chairperson of the African Union Commission on Women, Peace and Security. She is the founder and President of Femmes Africa Solidarité (FAS), an international NGO based in Geneva with its operation office in Dakar/Senegal. The organization seeks to foster, strengthen and promote the leadership role of women in conflict prevention, management and resolution in Africa. Mme Diop played an instrumental role in the adoption of the Solemn Declaration on Gender Equality in Africa as well as the Protocol to the African Charter on Human and People’s Rights on the Rights of Women in Africa. She has led peacebuilding programs as well as many women’s peace and security initiatives.

A passionate advocate for the economic empowerment of women, in 2012, under the leadership of Mme Diop, FAS coordinated the launch of the Empowering Women in Agriculture Initiative in Africa (EWA), which was co-chaired by Ellen Johnson-Sirleaf, the President of Liberia, and Paul Kagame, the President of Rwanda. A center of Excellence was also established for gender, Peace and Development (PAC) for training future young leaders in peace, development and peacebuilding with a special focus on gender.

She was named one of the 100 most influential people in the world by Time Magazine in 2011 and was awarded the Légion d’honneur by the French President in 2012. Mme Diop was co-chair of the World Economic Forum on Africa in 2014. Mme Diop studied International Relations and Diplomacy. She has a Honoris Causa from the United Nations-affiliated University for Peace (UPEACE), Costa Rica and Middlesex University, in United Kingdom.