The Man Behind the World Food Prize 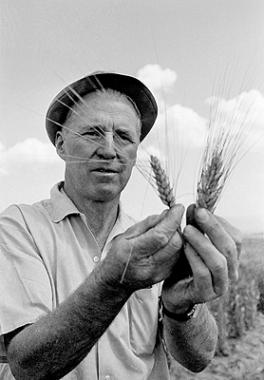 While the prize winners are receiving significant coverage in the international development community, we thought we would take a moment to introduce you to the inspiring person who brought the coveted World Food Prize into being: Dr. Norman Borlaug.

Dr. Norman Borlaug (March 25, 1914 – September 12, 2009), father of the Green Revolution, once wrote to the Hunger Project President: “I have spent 60 years seeing gender discrimination in scores of countries in Asia, Africa, and Latin America. I agree with your call for action to remove this injustice. I will whole-heartedly back you. GO FOR IT!”

Born in Iowa in 1914, Dr. Borlaug left his family’s farm to study Agricultural Forestry at the University of Minnesota, the same university where he eventually received his Ph.D. in plant pathology and genetics in 1942.

Early in his career, in an agricultural research position in Mexico, Dr. Borlaug developed a unique, high-yield, disease-resistant wheat that went on to forever change the world of agriculture, most notably in India, Pakistan and Mexico. Between 1964 and 2001, sustainable wheat production in India rose from 12 to 75 million tons, while wheat production in Pakistan increased from 4.5 to 22 million tons, due in large part to Dr. Borlaug’s research and advocacy.

Dr. Borlaug was one of the first, and definitely one of the most active, advocates for land-preservation in agriculture and the genetic manipulation of organisms (GMO) to increase the strength and yield of crops for small-holder farmers while reducing the cost. His work acknowledged the delicate balance of livelihood farming and environmental responsibility from all angles – scientific, practical and conceptual.

In support of his cause, in 1986 Dr. Borlaug created the now highly coveted World Food Prize. The following year, the inaugural prize was awarded to his former colleague and long-time Hunger Project Board Member, M. S. Swaminathan, himself known as Father of the Green Revolution in India.

Dr. Borlaug spent most of his life in Mexico where he served in a number of respected positions including Rockefeller Foundation scientist in charge of wheat improvement under the Cooperative Mexican Agricultural Program, consultant to Mexico’s Ministry of Agriculture and leader of the Wheat Program at International Maize and Wheat Improvement Center (CIMMYT). Dr. Borlaug’s research is still highly regarded in India and he was one of only 13 non-nationals to win the Padma Vibhushan, India’s second highest civilian honor, since its inception in 1954.

In 1970, Dr. Borlaug was awarded the Nobel Peace Prize for his lifetime of work to help feed the world. He went on to receive the Presidential Medal of Freedom and the Congressional Gold Medal, making him one of only six people in the world to receive all three prestigious recognitions.

It was Dr. Borlaug’s research and advocacy that paved the way for organizations like The Hunger Project to make a significant and lasting difference on agriculture and poverty in developing nations. Seventy years after he began his work in Mexico and on the 25th anniversary of the World Food Prize, we would like to thank Dr. Borlaug and the scientific advocates who are still making agricultural progress possible today!