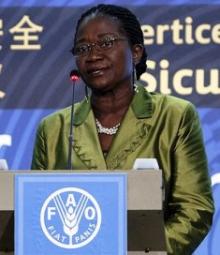 On a launch call with key investors on the evening of July 13, 2011, The Hunger Project’s (THP’s) President and CEO Mary Ellen McNish detailed the upcoming Annual Fall Event and had the honor of announcing the laureate for the 2011 Africa Prize for Leadership for the Sustainable End of Hunger: Liberian Minister of Agriculture, Dr. Florence Chenoweth.

Our distinguished laureate is a native of Liberia and the country’s Minister of Agriculture: Dr. Florence Chenoweth. Her career has been devoted to improving the livelihoods and food security of women farmers in Africa.
In 1980, Dr. Chenoweth and her family escaped Liberia after a violent coup, walking across the country to safety in Sierra Leone. In the following years she completed her education and served in a number of important development roles in Africa. Adamantly committed to sustainable agricultural development in Africa, Dr. Chenoweth joined the Food and Agriculture Organization of the UN (FAO) as its representative in Gambia, West Africa and went on to open FAO’s first office in South Africa following the end of apartheid.

When President Ellen Johnson Sirleaf, a past Africa Prize laureate, became President of Liberia, Dr. Chenoweth returned to her home country country and implemented a gender-based agricultural input campaign called Back to the Soil. The campaign enables rural women in female-headed households to receive at least 30 percent of needed farm inputs, significantly increasing food production, particularly rice and cassava, and as a result, in 2010 the World Food Programme began purchasing locally-produced, Liberian rice.

Under Dr. Chenoweth’s leadership, Liberia’s Ministry of Agriculture is training rural women and ensuring access to the resources necessary to become self sufficient in food production.

Honoring Dr. Chenoweth with the 2011 Africa Prize distinguishes her as a role model for women, African leaders and all empowered agents for positive change.

THE AFRICA PRIZE FOR LEADERSHIP

The Africa Prize for Leadership for the Sustainable End of Hunger was created by THP in 1987 to call forth the committed, effective leadership that Africa needs.

The prize celebrates, acknowledges and honors the extraordinary achievements of the women and men of Africa, who, through their tireless efforts, innovative spirit, and focused dedication, are taking actions to address the issues of hunger and poverty.

Over the last 24 years, THP has awarded the Africa Prize to distinguished African women and men who have exhibited exemplary leadership in the areas of food security, agriculture, health, education, women’s rights and economic entrepreneurship – nationally, regionally or continent-wide.

The laureate of this year’s Africa Prize will be presented a sculpture by the famed artist Takenobu Igarashi and a cash award of US$50,000 to further their work for the sustainable end of hunger.

Read more about the history of the Africa Prize.

Each year, THP’s Fall Event highlights a particular program or theme in the organization and honors those working to achieve the end of hunger. This year’s Fall Event, taking place the evening of October 22nd, will be a time to honor African leadership. It will be an evening to honor all women, men and children on the African continent and will celebrate global partnership in achieving the sustainable end of world hunger.

Nearly 600 people from over 20 countries – investors, activists, partner organizations, UN agencies and government leaders – will gather at New York City’s Chelsea Piers – Pier 60 to celebrate African leadership with the formal presentation of the Africa Prize for Leadership for the Sustainable End of Hunger.