Gender and Development in the Hillary Time-Out: Advancing the Unfinished Agenda 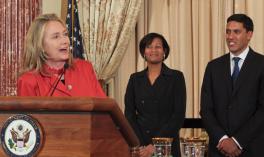 It was sad to see TV pundits who I admire stroke their chin and say “No, we don’t see any signature achievement of Hillary Clinton as Secretary of State.”

Nonsense! I’m no expert on geopolitics, but from where I sit, Hillary Clinton dramatically tackled the central moral issue of our age – the subjugation and dis-empowerment of women and girls. As a correlate, she began to move the “soft power” of diplomacy and development closer to equal status with defense.

Female presidents and prime ministers rarely do much on gender, other than hold a traditionally male seat. Yet Secretary Clinton moved gender issues from the sidelines to the forefront of policies not only in the world’s sole super power, but also in the wider world community.

How different life is today than it was four years ago. Four years ago, we could not imagine hundreds of thousands in the streets of India, the bastion of patriarchy, demanding a halt to rape. Major global institutions, which formerly treated gender as a sideline, now put the issue front and center.

I remember hearing some of Secretary Clinton’s fiery first speeches on women’s rights – and then seeing how the State Department staff would water them down in news releases. She didn’t let that gap last long – bringing in some of the best and brightest young women in America to gently but firmly shepherd all agencies with international programs into alignment and concerted action.

Since I believe that anything important can fit in a top-10 list, here are my top 10 areas where gender has dramatically advanced in the past four years, and what I believe still needs to be done.

While many of these key achievements have been institutionalized, hopefully with some momentum, we may see continued progress even as the momentum may slow. Those of us committed to the issue will perhaps need to shake ourselves awake to the need to redouble our own leadership to build on the momentum, and not merely pray for a 2016 Clinton presidency.

Nutrition is a gender issue. The future health of all of us is largely determined in the womb. And far too many mothers have had a lifetime of under-nutrition – eating last and least, denied health care and education, and married far too young. Secretary Clinton brought her leadership to the Scaling Up Nutrition (SUN) movement,

ensuring that the top priority be shifted to the nutrition of pregnant and nursing mothers during the critical 1,000 Day Window. The countries with the most malnutrition, however, have not yet joined the SUN movement, and determined diplomatic leadership is still needed.

The world financial crisis was concurrent with a world food price crisis, and the Obama administration led the G8 in reversing decades of declining investment. It was an honest debate: was the answer to invest heavily in big agriculture, or empower the small-scale farmers who grow most of the food, who themselves represent most of the hunger, the majority of whom are women? On Hillary’s watch, women farmers won, and US policy has new, strong gender policies and innovative metrics. Implementation to date, however, is spotty and does not come close to meeting the “Bostrup Test” of ensuring the majority of resources are targeted to women, as anything less will actually widen the gender gap. Champions of this issue must keep pressing for strong and effective implementation.

Both the US and the UN took action to address the most egregious gap between rich and poor – the lack of progress in reducing appalling rates of maternal mortality. The laudable investments in halting AIDS had the unintended consequence of sucking talent out of community health, and Hillary led the charge for a Global Health Initiative (GHI) that would channel AIDS and other resources into strengthening health systems, with a focus on women and children. Again, implementation is lagging and the initial vision of women-centered health-system strengthening has faded. We need more, compelling dialog with disease-focused practitioners who fully understand and champion the GHI approach.

Hillary Clinton did not invent the “whole of government” approach, but she adopted it powerfully, and led US development policy to favor integrated strategies over silos. Integrated strategies are tremendously important from a gender perspective, as impoverished women bear an integrated (and unjust) set of burdens that can only be effectively addressed with holistic strategies, while patriarchal power generally runs in silos. Integration, however, so runs counter to bureaucracy that this is a huge lift, and has barely begun. We need much more direct and compelling evidence and arguments for the importance of integrated strategies.

Hillary is the ultimate rock star to women in public life, and the appointment of Melanne Verveer – her former chief of staff and founder of Vital Voices – to be our first Ambassador-at-large on global women’s issues gave a huge boost to this issue. Amb. Verveer traveled to 60 countries encouraging women at all levels of decision-making leadership, including some of the poorest villages of India and Bangladesh. Investing in the capacity building of emerging women leaders and their organizations, however, has fallen off the agenda and – in the aftermath of the Arab Spring, is more important than ever.

Women’s role in the military has transformed, and the US now has a National Action Plan for increasing women’s role in peace building, consistent with UN resolution 1325. I don’t believe the media or general public – here and abroad – understand how strategically important this is to resolving some of the most dangerous conflicts in our world, and all of us need to get the mic and build public support for this initiative.

All forms of gender discrimination are held in place by violence and the threat of violence. Extraordinary progress has been made worldwide in the past four years – a horribly divided Congress has renewed the Violence Against Women Act. Making real progress requires profound social, political and judicial transformation, and this will require sustained, unyielding pressure, year after year.

This past September, Secretary Clinton launched the Equal Futures Partnership, to enhance education and economic opportunity for women and girls. Implementation of the initiative is unclear.

The US has championed the creation of a major enhancement of the UN’s ability to tackle gender issues. Yet the US Senate has never ratified CEDAW or even the Convention on the Rights of the Child, undermining our nation’s moral authority. UN Women was launched with great fanfare, but its capacity and funding are still very weak. We should support Senator Kerry in using his good will with the Senate to get movement on these fronts.

US development agencies have made great progress in the past four years in their commitment to monitoring, evaluation and transparency with major emphasis on gender disaggregated data. Last July, Secretary Clinton launched Data 2x a new initiative with the World Bank, the UN, and OECD to greatly increase the amount and quantity of gender data. A progress report is due next July, and no news of the initiative has appeared since the launch.

The name of the game for the next four years is implementation, implementation, and implementation. There are small groups of champions in each of these ten areas, but it would be great to have some sort of scorecard to track progress on all of them, so we can bring our collective voices to bear. We all depended on Secretary Clinton to keep her eye on the big picture and keep the torch held high. As we each move our piece of the implementation forward, we will all need to cultivate and project that same kind of big-picture perspective – carrying the public with us – so the wind doesn’t go out of the sails.