Dionne Warwick on NBC’s Celebrity Apprentice for The Hunger Project 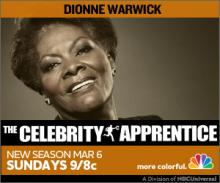 We are thrilled to announce that Dionne Warwick will be on the upcoming season (beginning March 6) of NBC’s “The Celebrity Apprentice” on behalf of The Hunger Project!

Contestants will not be vying for a job with Donald Trump; instead, the business-savvy celebrity contestants will be working towards a greater goal as they raise money for their various charities throughout the season. Not only will the final winner be crowned The Celebrity Apprentice, but he or she will also have the honor of delivering a $250,000 bonus check to their designated charity.

All of the celebrities will be competing in business-driven tasks around New York City, using their fame along with their business acumen to win challenges, while ultimately raising money and awareness for their respective causes.

Just as in the regular “Apprentice,” the celebrities will be subjected to long hours, grueling mental challenges, personality clashes, and intense scrutiny — all without the help of their regular support system of agents, managers, and personal assistants.

Certain tasks encourage the contestants to reach out to their network of celebrity contacts for assistance or donations — making for entertaining surprise visits by some of the world’s biggest stars along the way.

All of the tasks will be judged by Trump and his advisers in the Boardroom. Returning to the Boardroom are Trump’s children (and colleagues) Ivanka and Donald Trump Jr., alongside longtime Trump Organization employee and “Apprentice” advisor George Ross.

Dionne also recently worked with The Hunger Project to hold a gala benefit concert in London this past January in honor of her 70th birthday and in support of The Hunger Project (read more about the concert, which took place on World Hunger Day).