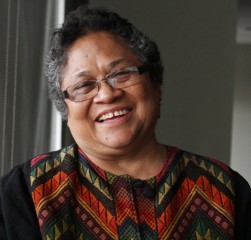 Former Chair of the UN Permanent Forum on Indigenous Issues

Dr. Mirna Cunningham, from the indigenous Miskito community of Waspam located on the banks of the River Wangki in Nicaragua, joined The Hunger Project’s Global Board in 2015.

After studying for her Master of Primary Education, Dr. Cunningham returned to her community of origin to work as a teacher. She then returned to school to study medicine and surgery at the National Autonomous University of Nicaragua, becoming the first Miskita woman doctor. In 1990s the first steps to establish the University of the Autonomous Regions of the Nicaraguan Caribbean Coast URACCAN were taken, in which Dr. Cunningham was the founding Chancellor from 1992- 2004. URACCAN was one of the first Latin American experiences of indigenous, intercultural and gender-sensitive higher education. It has served as inspiration for many indigenous people of the continent.

Since 2005, Dr. Cunningham has been the coordinator of the Indian Chair (CII), which is composed of 60 indigenous scholars from 18 countries in Latin America. This is part of a wider graduate curriculum offered by UII in 25 Associated Academic Centers, which are designed to provide information, analysis, and conceptual and methodological contributions to knowledge, spirituality, world view, rights and processes of struggle of indigenous people.

Dr. Cunningham has been the Chairperson of the Center for Autonomy and Development of indigenous People (CADPI) since 2003, which is an organization working in the areas of intercultural communication, cultural revitalization, rights of indigenous women, climate change and its impact on indigenous people. It has established an observatory on regional ethnic autonomy in Nicaragua.

She has also been a member of the Board of the Global Fund for Women and advised the Alliance of Indigenous Women and International Indigenous Women’s Forum (FIMI). From 2011-2013, she served as Chair of the UN Permanent Forum on Indigenous Issues. In 2012, Dr. Cunningham received an Award of Woman Distinction from non-profit organization MADRE.

In 2014, she was appointed as Special Ambassador of FAO for the International Year of Family Farming extending her position as Ambassador to 2016.

She was Adviser to the President of the General Assembly of the UN World Conference of Indigenous People of the UN in 2014.

Dr. Cunningham is currently a member of the Board of Association for Women’s Rights in Development (AWID), The Hunger Project, and a Trust Fund for Indigenous People, Tropical Agricultural Research and Higher Education Center (CATIE), Indigenous Peoples Assistance Facility (IPAF).

She is currently First Vice President of the Board of the Fund for the Development of Indigenous People of Latin America and the Caribbean.