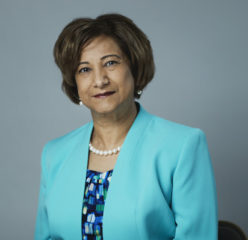 Koosum Kalyan joined The Hunger Project’s Global Board in 2020.

Ms. Kalyan’s corporate career began when she was recruited at University of Durban-Westville to go on an assignment to Melbourne, Australia as economist at the Electricity Commission of Victoria.

On her return she joined the Chamber of Mines of South Africa as an Economist. She was appointed Chief Economist at Shell Southern Africa and then GM of Corporate/Downstream before her posting to Shell International in London in 2000.

She spent nine years in London on an expat assignment as Senior Business Development Executive for Oil and Gas Exploration in Africa, responsible for new country entry to Libya, Angola, Tanzania, Equatorial Guinea, Chad and Mozambique, and was a member of the Shell International Group Scenario Planning Team.

She currently serves on the following Boards as non-Executive Director: Aker Solutions Oil and Gas and the International Advisory Board of Gardaworld.

Ms. Kalyan previously served as Chairman of the South African Reserve Bank Note Company, Board Director of the South African Mint, Standard Bank, AOS Orwell Oil and Gas, Petmin Mining, Mobile Telephone Holding (MTN Group LTD) and Anglo American. She is also a former Board Member of the Tallberg Foundation in Sweden, where she served as Chairman of the Jury on Global Pragmatic Leadership Award.

She was a member and co-facilitator of the UNAIDS Scenario team in Africa.

She was also a member of the Advisory Council of the Commonwealth Business Forum. She assisted many businesses in Africa on long term scenario planning processes. She also assisted the Planning Commissions of Nigeria, Angola, South Africa and Equatorial Guinea during her employment at Shell using the well known Shell methodology of scenario planning.

She often gets invited to speak on Africa and business at conferences and round table business and NGO meetings. Ms. Kalyan was one the conveners of the Indlulamithi South Africa Scenarios 2030, which was launched in 2017 and is currently being revisited for specific sectors. She was a member of the Extractive Industries Transparency Initiative.

Ms. Kalyan is passionate about Africa and being a change maker in Africa. She is Patron of Aryan Benevolent Home, the oldest old age home in South Africa, which also includes a home for abused women and orphaned and abused children. She is particularly proud of one youngster from the home who recently graduated from INSEAD.

Lastly, Ms. Kalyan is the cofounder of the Kendra Business Forum in Durban, a non-profit organization for startups, small and medium businesses, and women’s leadership.